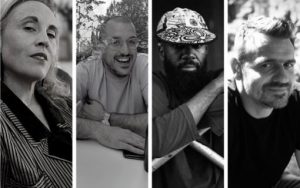 SixtyFour Music was founded by Composer and Music Supervisor, Nick Payne (The Favourite, Killing of A Sacred Deer, The Lobster) and Sound Designers Johnnie Burn (Waves, The Favourite, Under The Skin) and Warren Hamilton.

With offices in London and New York our creative team has years of music supervision experience and a genuine love for music and film and collaborating with directors. We have worked as Artists and Performers, Radio Producers, Composers, Arrangers, DJ’s and Podcasters. SixtyFour first launched in the advertising space and quickly became the ‘go to’ music house for original composition, music supervision and bespoke re-records, regularly working with the Royal Philharmonic Orchestra and Chamber Orchestra of London at Abbey Road.

SixtyFour ventured into feature films in 2015 when Nick was asked to supervise Yorgos Lanthimos’ The Lobster.  We are a collective of five Music Supervisors, Anne Booty, Nick Payne, Joe Rice and The Twilite Tone. We work both collaboratively in teams and independently as a one-stop shop on clearances, in-house catalogue (5000+), hiring composers, sound design, curating moodboards at the script stage and DJ’ing at the premier!

SixtyFour are the first official music partners of Free The Work, an initiative founded by director Alma Har’el, committed to making equal opportunities for underrepresented creators. Through their connection to Free The Work, they went on to set up their own composer roster, SixtyFour Talent, in 2021 which has grown to 200+ Composers since its conception in 2018.

SixtyFour work with Director Yorgos Lanthamos and have an exciting year ahead, with three new feature films in pre-production.