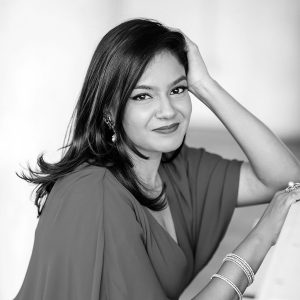 Indian American composer and classical pianist Raashi Kulkarni has an elevated compositional voice that can be heard in the new Netflix comedy, Wedding Season, for Imagine Entertainment and the upcoming Disney+ film, World’s Best, from director Roshan Sethi, produced by Thomas Kail and Utkarsh Ambudkar. Raashi’s global perspective and mastery of various musical disciplines have made her an in-demand collaborator. With Blake Neely, Raashi composed additional music for over 150 episodes on series such as The CW’s Supergirl, DC’s Legends of Tomorrow, Arrow, The Flash and composed and orchestrated the music for DC Universe’s first Bollywood-inspired musical, featured on DC’s Legends of Tomorrow.

Kulkarni is one of eight composers and the first person of Indian origin to be selected for the Universal Composers Initiative, developed by NBCUniversal’s Global Talent Development & Inclusion group, partnered with Universal Global Film Music.

In addition to scoring film and television, Raashi is a globally recognized recording and performing artist. Her two independent albums are a hybrid of Indian and Western music and debuted at #1 and #2 on the iTunes World Music Charts, respectively. She is a voting member of both the Television Academy and Recording Academy and currently serves on both the Membership and Diversity, Equity, and Inclusion Committees for the latter. Raashi is also currently serving as Executive Director of the Alliance for Women Film Composers.

Raashi earned her Master of Music degree from University of Southern California, where she was a recipient of the Joe and Alice Harnell Scholar Award for Scoring for Motion Pictures and Television. Prior to USC, Raashi graduated with a Bachelor of Science in Economics and a minor in Music from The George Washington University, where she was a Presidential Arts Scholar and recipient of the Barry Manilow Endowed Prize in Music.

In the last decade, Raashi has performed in concert tours across the globe with several prominent artists from the United States and India, including world-renowned Bollywood composers, Vishal Dadlani and Shekhar Ravjiani. She has performed as a featured pianist at the Shrine Auditorium, Kennedy Center, Smithsonian Museum, Patriot Center, Warner Theatre and Kodak Hall. Her YouTube piano covers, which are arranged solely by ear, have been discovered and recognized by iHeartRadio, On Air with Ryan Seacrest, Capitol Records (as part of Beck’s successful GRAMMY campaign), YouTube India, and Pharrell Williams’ partnership with The United Nations Foundation.