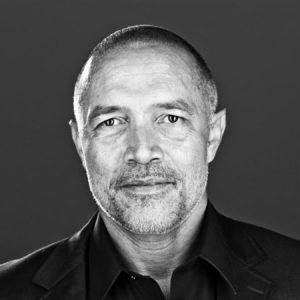 Two-time Emmy-nominated composer Michael Abels is known for his genre-defying scores for the Jordan Peele films Get Out  and Us, for which Abels won a World Soundtrack Award, the Jerry Goldsmith Award, a Critics Choice nomination, and multiple critics awards.  The hip-hop influenced score for US was short-listed for the Oscar, and was even named “Score of the Decade” by The Wrap.  Other recent media projects include the films Bad Education, Nightbooks, Fake Famous, and the docu-series Allen vs. Farrow.  Current releases include Beauty which premiered at the Tribeca Festival and is now streaming on Netflix, and Breaking (formerly “892″) which premiered at Sundance and opens in theaters August 29.  Abels’ third collaboration with Jordan Peele, Nope, opens in theaters July 22.

Abels’ creative output also includes many concert works, including At War With Ourselves for the Kronos Quartet, Isolation Variation for Hilary Hahn, and the opera Omar co-composed with Grammy-winning singer/songwriter Rhiannon Giddens, which opens at the Dorothy Chandler Pavilion, also known as the Los Angeles Opera, on October 22.  His scores have been performed by the New York Philharmonic, the Chicago Symphony, the Los Angeles Master Chorale and many others.  Some of these pieces are available on the Cedille label, including Delights & Dances and Winged Creatures.  Current commissions include a work for the National Symphony, and a guitar concerto for Grammy-nominated artist Mak Grgic.

Abels is co-founder of the Composers Diversity Collective, an advocacy group to increase visibility of composers of color in film, gaming and streaming media.