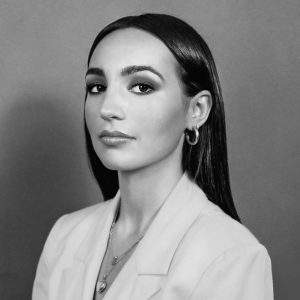 Emily Bear composed the wildly popular Bridgerton Musical which recently won the Grammy for Best Musical Theater Album. The incredible response and viral success of the music reached all corners of the globe. Bear’s prolific composing, orchestrating and production abilities, combined with virtuosic piano and vocal skills, are being demonstrated in front of the world as she and her writing partner compose the music live on social media.

An award-winning composer and recording artist since the age of five, Bear has achieved groundbreaking success as a pianist, composer, and singer-songwriter. Her expertise and love for film and media scoring highlights her ability to move between musical styles and to communicate story through music.

Her film and media roster includes Disney, DreamWorks, Warner Bros., and Universal. Clients value her ability to create both the score for a project as well as the songs.  Whether she is creating a cinematic orchestral soundtrack or writing a pop song, Emily pulls from her skills in jazz, classical, musical theatre and pop.

Her long-time mentor, Quincy Jones says, “She’s the most delightful human being I’ve ever met in my life”, “And her music is the same way. I am at once astounded and inspired by the enormous talent that Emily embodies. She is the complete 360-degree package, and there are no limits to the musical heights she can reach. Not only is she a concert level classical pianist, a Billboard topping jazz pianist, acclaimed jazz and classical composer, expert film scorer, and superbly talented pop singer/songwriter, she is one of the kindest humans I know. Emily has a unique ability to seamlessly transition from classical to jazz, from be-bop to bossa nova, from blues to classical, to popular music; her potential is truly endless. Her compositions are stunning, and she effortlessly combines elements of all types of music. I have been in the business for over 70 years now and I have yet to see another artist like her.”

Bear has performed her original compositions and arrangements with orchestras and ensembles on legendary stages around the world, including at Carnegie Hall, Lincoln Center, Hollywood Bowl, and Montreux Jazz Festival. Honored by the Songwriters Hall of Fame, her instinct for writing and singing pop music has led to collaborations with top songwriters and producers in the industry.

Over the years, Emily has garnered more than 40 million views on YouTube and a documentary on her life received an EMMY Award. Growing up in front of the world, Emily has helped raise millions for charities through events and performances and is passionate about the importance of arts education.