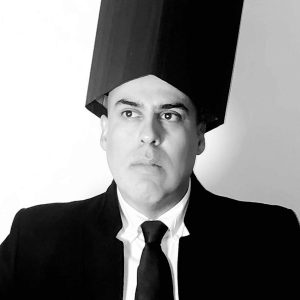 Ego Plum is a musician, award-winning composer, and producer whose distinctive sound and unique sensibility has made him the musical king of quirky animation. He has lent his creative talents to numerous animated series including Amy Winfrey’s hit series Making Fiends, Welcome To The Wayne, Harvey Beaks – for which he assembled Nickelodeon’s first 60-piece orchestra – and the forthcoming, highly-anticipated Netflix animated series The Cuphead Show!

Ego first got the attention of Nickelodeon in 2008 with his unabashedly original score for Making Fiends, and has since scored other animated series including SpongeBob Squarepants, Disney’s Star Vs. The Forces Of Evil, and most recently contributed additional music for the animated Nickelodeon show Santiago and the Seas. His musical subversions have also been recently heard in the Richard Elfman sci-fi comedy film Hipsters, Aliens, and Geeks. Up next for Plum is the HBOMax animated Hanna-Barbara series Welcome to Jellystone, and two upcoming projects set in the Spongebob Squarepants universe,  Kamp Koral and The Patrick Star Show.

In 2012, Ego was presented with an Ovation Honor by the Los Angeles Stage Alliance for his Russian-inspired mechanical musical score and original songs for the Gogol Project, and in the same year he completed his first orchestral score for the black & white 35mm indie feature, The Ghastly Love of Johnny X, starring Academy Award-winner Paul Williams.

As a musician, Plum serves as the musical director of the Ebola Music Orchestra, and has toured the United States and Europe playing guitar with Grammy-nominated comedy-rock group Green Jellÿ. His music can also be heard in various live stage productions, KROQ radio bumpers, TV commercials, and fashion shows.