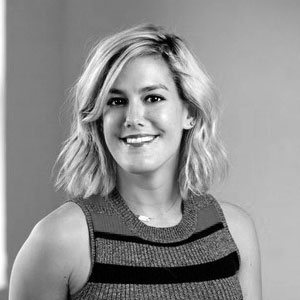 Amanda Krieg Thomas has been passionate about the intersection of music and storytelling all her life, from singing in choirs as a child, to producing original stage musicals in college, to moving across the country to pursue a career in music supervision. Since then she has worked tirelessly in the field for over a decade, collaborating with top-level creators on a wide range of films and television series. Current projects include limited series Monster (Netflix) starring Evan Peters as serial killer Jeffrey Dahmer, Dopesick (FX for Hulu), The Shrink Next Door (Apple TV+), Pam & Tommy (Hulu), and season six of animated series Big Mouth (Netflix) as well as it’s spinoff Human Resources (Netflix). She is also working on new seasons of the celebrated anthology series, American Crime Story: Impeachment (FX) and American Horror Story (FX). Recently completed work includes limited series Halston (Netflix), coming of age comedy Plan B (Hulu), YA thriller Panic (Amazon) and the final seasons of Pose (FX) and Claws (TNT). Career highlights include the film adaptation of the Broadway musical, The Prom starring Meryl Streep, James Corden and Nicole Kidman, critically-acclaimed series, The Americans (FX) and Hollywood (Netflix). Amanda previously served on the Board of Directors for The Guild of Music Supervisors, and has been nominated for a total of 5 Guild of Music Supervisors Awards. Her first book, Thinking In Sync: A Primer on the Mind of a Music Supervisor, is available on Amazon.