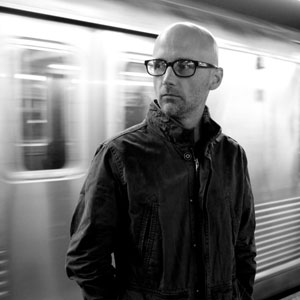 Moby is a Grammy-nominated, multi-platinum-selling recording artist, producer, DJ and international music star. In the twenty years since the release of his first single, “Go,” his style continually evolved while selling more than 20 million albums in the process. Moby’s music has been featured prominently in hundreds of movies, including the Bourne trilogy, and by some of the industry’s most celebrated directors. Michael Mann, Oliver Stone, Paul Haggis, Richard Kelly, Paul Greengrass, Doug Liman, Gary Ross, David Frankel, and Danny Boyle have all used Moby’s unique fusion of musical elements, proving that his style lends itself to cinematic images and storytelling in such films as Heat, Go, The Beach, The Devil Wears Prada, Ali, Donnie Darko, Any Given Sunday, and Seabiscuit.

As a composer, Moby scored two Oscar-nominated documentaries, Wasteland and The Tsumani and the Cherry Blossom. Moby recently did the score the short Myoot directed by Danny Machado.  His track ”Extreme Ways” was featured in the Bourne Legacy. The original version of “Extreme Ways” was the second single from Moby’s studio album 18, which earned gold and platinum awards in over 30 countries worldwide. For independent and non-profit filmmakers he created MobyGratis.com, to provide free music for use in their projects.