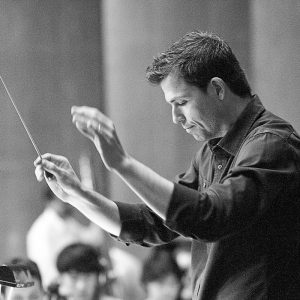 Joey Newman (ASCAP) is an Emmy®-nominated, third generation film and television composer of the famed Hollywood musical Newman dynasty. Joey’s grandfather is famed composer and conductor Lionel Newman, and his great uncle is Alfred Newman, both of whom are part of the very definition of movie music. Film composing runs in the Newman family, with Joey’s cousins Randy, Thomas and David – all successful composers in their own right. And, Joey’s father, Joe Frank Carollo, played bass and sang in the famed 1970’s rock group “Hamilton, Joe Frank and Reynolds”.

Joey began serious composition studies at the Berklee College of Music in Boston, earning his Bachelor of Music degree. He returned to his hometown of Los Angeles where he began his career working in television with Emmy®-winning composer W.G. “Snuffy” Walden, co-composing the final seasons of Once and Again, starring Sela Ward, and Providence, starring Melina Kanakaredes. Joey also provided orchestrations for Aaron Sorkin’s The West Wing as well as a number of other primetime dramas and sitcoms.

Joey has composed the music to award-winning feature films, numerous television series, video games and provided arrangements for recording artists like Rufus Wainwright and Broadway composers Marcy & Zina and Cinco Paul. For 5 years, Joey composed the orchestral score to NCsoft’s Lineage, one of the biggest online role-playing games in history. For 9 seasons, Joey composed the score for the hit ABC comedy The Middle, starring Patricia Heaton, and 6 seasons for TLC’s docu-reality series Little People, Big World, for which his underscore was nominated for a Primetime Emmy® Award. Joey’s music can currently be heard on the CBS drama All Rise, starring Simone Missick, and the Disney+ comedy Diary Of A Future President, starring Tess Romero and Selenis Leyva. Film credits include the multiple award-winning drama Any Day Now  (starring Alan Cumming and Garret Dillahunt) and the upcoming Two Eyes (starring Kate Bornstein and Joshua Leonard). As a conductor and orchestrator, Joey has worked across the media spectrum including orchestrating for his cousin Randy and conducting alongside Michael Tilson Thomas and John Williams.

“It’s about keeping standards high and writing great music to picture”, Joey said when asked about his view on scoring for film and television. “Being very sensitive to storytelling. That’s all I ever wanted to be in this business – a creative collaborator and musical story teller”.