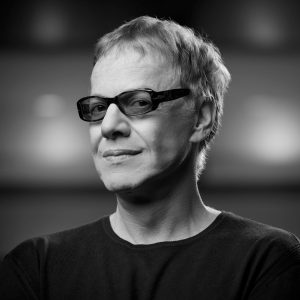 A native of Los Angeles, Elfman grew up loving film music. He travelled the world as a young man, absorbing its musical diversity. He helped found the band Oingo Boingo, and came to the attention of a young Tim Burton, who asked him to write the score for Pee-wee’s Big Adventure. 34 years later, the two have forged one of the most fruitful composer-director collaborations in film history. In addition to his film work, Elfman wrote the iconic theme music for the television series The Simpsons and Desperate Housewives.

Elfman has expanded his writing to composing orchestral concert works which include: Serenada Schizophrana, a symphony commissioned by the American Composer’s Orchestra, which premiered at Carnegie Hall in 2005, Rabbit and Rogue, for the American Ballet Theater choreographed by Twyla Tharp, performed at The Metropolitan Opera house in 2008, and Iris for Cirque du Soleil directed by French choreographer Philippe Decouflé.  In 2011, Danny Elfman’s Music from the Films of Tim Burton live orchestral concert, premiered at Royal Albert Hall, and has since toured around the world and won two Emmys.

In October 2020, Elfman released a new single, “Happy”, the first solo music he had released since 1984. In 2021, Elfman continued releasing singles, accompanied by music videos on the 11th of each month.

“I need to push myself into new territory with fresh challenges as much as I can and whenever I can. I am told I have a recognizable style but my greatest pleasure is when I can surprise the audience with my music.”