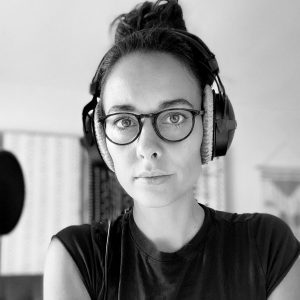 Alana Da Fonseca has been working in the film/tv space since 2005 as music producer, songwriter, vocal arranger, performer, producer and engineer. She gets in early on music-heavy film projects, from the script phase, through pre-records, overseeing performances on set, into post-production and the final mix. Her executive music producer credits include Pitch Perfect 3, Poms, Good Boys, Alvin and the Chipmunks 3, the Dreamworks Animation series Trollstopia, Madagascar: A Little Wild, Trolls: The Beat Goes On!, and the Nickelodeon series Alvinnn!!! and the Chipmunks. As a vocal producer she was responsible for the Julie and the Phantoms songs of the series of the same name, and as a music producer, she’s contributed to Isn’t It Romantic, The Addams Family, Eurovision, among others.

As a vocal coach and producer, she’s worked with a Hollywood who’s-who including Ferrell, Anna Kendrick, Rebel Wilson, Liam Hemsworth, and Chris Evans, and top 40 recording artists like Daft Punk, Sean Paul, Ke$ha, and Miley Cyrus. She’s written more than 700 original songs that can be heard in such films as Fifty Shades of Grey and Hot Tub Time Machine, and the hit series Empire, contributing to multiple platinum and gold soundtrack albums in the process.

Alana grew up in Manhattan. The daughter of a Brazilian jazz drummer, she was surrounded by a community of musicians and sang from the time she could speak, improvising songs shortly thereafter. After graduating cum laude from Purchase College with a degree in Music Production, she ran full-tilt into music-making. “I love the diversity of my job,” she says. “Monday morning I’m writing an anthemic female empowerment pop song for an ad, and by afternoon a fun, story driven rap for Trollstopia. I get to express the full range of my musicality on a regular basis, and I’m constantly stretching, exploring and learning to be able to best serve my projects.”