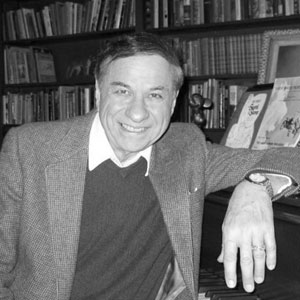 Richard M. Sherman, along with his brother Robert B. Sherman, has provided the musical soundtrack to an entire generation of families.

Sherman Brothers songs have graced such classic films as Mary Poppins, The Jungle Book, Chitty Chitty Bang Bang, The Parent Trap, Charlotte’s Webb, The Many Adventures of Winnie the Pooh, and Bedknobs and Broomsticks.

Their songs can also be heard in the Disney theme park attractions It’s a Small World, The Enchanted Tiki Room, and Carousel of Progress. On television they have written the theme song for Walt Disney’s Wonderful World of Color.

Their songs include “Your Sixteen”, “Let’s Get Together”, “Spoonful of Sugar”, “Jolly Holiday”, “Feed the Birds”, “Chim Chim Cher-ee”, “Supercalifragililsticexpialidocious”, “The Wonderful Thing About Tiggers”, “I Wanna Be Like You”, “Hushabye Mountain”, and “Winnie the Pooh”. Richard Sherman recently composed the song “Make Way For Tomorrow, Today” for the film Iron Man 2.

For the theatre the Sherman Brothers have had Broadway hits with Over Here!, Chitty Chitty Bang Bang, and Mary Poppins—which is currently celebrating its sixth year on Broadway.

Sherman’s father Al was a popular Tin Pan Alley songwriter, and he naturally gravitated towards music himself. After college he was encouraged by his father to create a songwriting team with his brother. After a few radio hits (“You’re Sixteen”), the duo was approached by Walt Disney to write occasional title songs for movies. Then, in 1960, they were hired as the studio’s first on-staff songwriters—soon winning two Academy Awards for their work on Mary Poppins. Richard’s songs have become a staple of the 20th century, and the delight of multiple generations of children and adults. “This whole thing has been a hobby for me,” he says,” all these years. I’ve been very fortunate to make a living at the thing I love to do. It’s never been work for me.”

Richard was brought on as a music consultant for the critically acclaimed Disney film Saving Mr. Banks directed by John Lee Hancock, starring Tom Hanks and Emma Thompson and Disney’s remake of the beloved classic, The Jungle Book directed by Jon Favreau. Most recently he worked as a music consultant on the Academy Award-nominated Disney sequel, Mary Poppins Returns starring Emily Blunt and Meryl Streep.