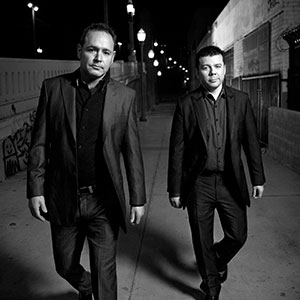 The Crystal Method are one of the pioneers and most enduring and adventurous acts in electronic music.

For more than 20 years, the Grammy-nominated duo—comprised of Ken Jordan and Scott Kirkland—have had a dramatic presence in the world of film, television, videogames, and advertising both as composers of original music and as one of the most licensed artists of the last two decades.

The Crystal Method’s latest work can be heard in a music documentary film about session and touring musicians, Hired Gun directed by Fran Strine and The Sisterhood of Night directed by Caryn Waechter. They also scored the Fox sci-fi cop series Almost Human for executive producer JJ Abrams. For the last ten years, they have had (and regularly update), the buzzing theme for the long-running series Bones.

They recently wrote several original songs for the Hugh Jackman action drama Real Steel, appear in the Universal Pictures film Lucy and were the first artist to write original music for the popular online multiplayer game League of Legends, appearing live at the world championships of the game at Staples Center. The Crystal Method recently wrote the main title theme for the Guillermo Del Toro animated series, 3 Below.

Jordan and Kirkland met in a grocery store in Las Vegas, Nevada, and their common fascination with Kirkland’s drum machine gave way to a dynamic musical collaboration which this year celebrates it’s 20th anniversary.

The Crystal Method have generated five albums of pulsating dance tracks and sold millions of records world wide. Their most recent self-titled album entered at  #1 on the iTunes Electronic Albums chart in February of this year.

Their music has been used in hundreds of productions and inspired many of today’s EDM artists. (Their history and songwriting process was recently profiled in the award winning documentary Re:Generation.)

“We’re just a couple of guys who like big, distorted beats, synthesizers and guitar pedals,” says Kirkland. “But we always knew that the style and the energy would slowly and eventually permeate pop culture.”