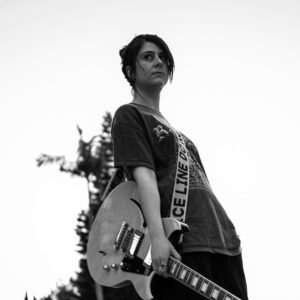 Amit May Cohen (she/her) is a Los Angeles based composer for film and TV, best known for Disney Channel’s Zombies 2 which she co-composed with George S. Clinton (Austin Powers, The Santa Clause). She has worked as an additional composer and/or orchestrator on projects including Fast & Furious Presents: Hobbs and Shaw (2019), Valley Girl (2018), SWAT (2017-2020), The Sinner (2018-2020), Curious George: Cape Ahoy and the Australian Academy Award nominated documentary In My Blood It Runs (2019). Her score for the short film Wrestling Za’atari (2016) earned her Best Score nominations in both the Milan and London International Filmmaker Festivals.

Originally from Israel, Amit has always been naturally curious about sounds from different cultures, striking a balance between tradition and innovation. Many of her scores have incorporated experimental elements such as improvised saxophone, mouth percussion, detuned guitars, and bird sounds.

Amit was chosen to participate in the prestigious Sundance Music and Sound Design Lab in 2018 at Skywalker Ranch; she won 2nd Place in the MTNA National Composition Competition with her contemporary piece “Black Dawn” in 2016; and she was awarded the ASCAP Emerging Film Composer Award In 2015.