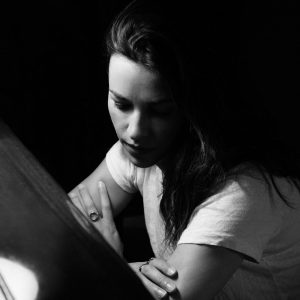 Amelia Warner is a fresh – and refreshing – new voice in film music. Warner played the piano from the time she was little, growing up in northwest England in a family of actors, and was telling stories with her music from the start. Warner began her music career in 2009 when she wrote and performed the song “Beasts” followed by her second single “Rewind City”. In October of 2011, Warner signed a record deal with Island Records. Her cover version of the Smith’s 1984 B-side “Please, Please, Please, Let me Get What I Want” was released in November 2011. Since releasing her album Renditions, Amelia spent much of her time composing for advertisements and short films. Later Warner would go on to release hit neoclassical albums including Arms (2015), Visitors (2018) and most recently Haven (2020), which conquered the classical charts on iTunes.

In 2016, Amelia was tapped to score her first feature length film entitled Mum’s List, starring Rafe Spall where she provided a reflective, elegant score. The following year she helped bring an old story to modern life with her score to Mary Shelley, starring Elle Fanning as the famous Frankenstein author, with otherworldly music for an orchestra haunted by ethereal female vocals. In 2020 Amelia was asked by Academy Award-winning screenwriter and director John Patrick Shanley to score his romantic comedy Wild Mountain Thyme, where her sweeping, lush orchestral score swelled against the imagery of iconic green hills of Ireland.

Warner shapeshifted from acting in high-profile British TV and films to becoming a composer—but even before her life on camera (in projects like Lorna Doone and Quills), her heart always beat for music. She played the piano from the time she was little, growing up in northwest England in a family of actors, and was telling stories with her music from the start. As an actor, she often composed on set between takes, and it was only a matter of time before she turned her talents toward giving emotional soul to screen stories. After she scored a few commercials and a short film, Mum’s List director Niall Johnson heard her second EP and asked if he could use a piece in the film. Warner said yes, and added: “who’s scoring it?”

“I really enjoy the boundaries that you’re given as a film composer,” she says. “I find it really satisfying to try and make something work for a cue. It feels like a big puzzle, or a big tapestry, and just finding moments and themes and weaving them in and bringing them back—I really enjoy that side of it.”