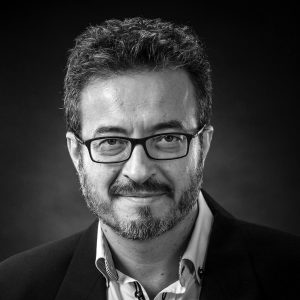 Roque Baños was born in Jumilla (Murcia) in 1968. He began his musical education at the age of 9, in the Conservatorio Superior de Música de Murcia where he finished elementary level, specializing in saxophone, obtaining Honors in both music theory and saxophone. In 1986, he moved to Madrid, where he completed studies in saxophone, piano, music theory, composition and conducting at the Real Conservatorio Superior de Música de Madrid with Honors and several merits mentions. In 1993, Baños received a grant from the Ministry of Culture in Spain to study at Berklee College of Music in Boston. He graduated Summa Cum Laude in the fields of Film Scoring and Performance in 1995 and received the Robert Share Award for demonstrating the highest musical-dramatic level in the area of film music composition as well as an Achievement Award for his outstanding performance abilities.

Baños had a prolific career as a composer and soloist during his years of study, completing several orchestral and band pieces and receiving many awards. Additionally, he earned a position as an Officer Musician in the Spanish Army in 1987, where he continued an intense compositional period writing concert music for Marching Band and Chamber ensembles. He went on to develop a career as a classical saxophone soloist, premiering works by a number of European composers in addition to his own throughout the most prestigious concert halls in Spain. Despite his success as a soloist, Baños was always creatively pulled towards composition and conducting. He has premiered and directed his own scores at the National Auditorium in Madrid, the Reina Sofia Auditorium, the Cultural Circle of Fine Arts Hall, and several music halls in Spain and abroad.

In 1997, Baños completed his first film score for the film Back Roads directed by Emilio Martinez Lazaro, one of the most acclaimed directors in Spain. He has since gone on to work with many of Spain’s most renowned directors including Alex de la Iglesia, Daniel Monzon, Carlos Saura, and Santiago Segura. Baños has earned international recognition working with acclaimed directors such as Terry Gilliam, Ron Howard, Kevin Reynolds, Spike Lee, Jonathan Glazor, and Brad Anderson amongst others. Baños’s first US production was the 2013 reboot of the horror film franchise Evil Dead directed by Fede Alvarez, with whom he has a close personal and professional relationship. Despite his continuing success in the American film market, Baños remains intensely committed to his origins in the Spanish film industry.