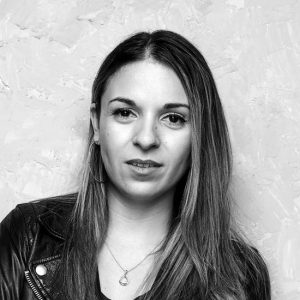 Perrine Virgile is a French TV and film composer based in Los Angeles, CA. After studying classical music at the French conservatory for twelve years and receiving a degree in Sound Engineering in Nice, France, Perrine moved to Boston, MA at 20 years old to attend the prestigious Berklee College of Music. She graduated in late 2014 with a dual major in Film Scoring and Music Business, and moved to Los Angeles early 2015 to pursue her career as a film composer.

Perrine has worked alongside composer Jeff Russo (“Fargo”, “Star Trek Discovery”, “Legion”) for the past 5 years as a scoring assistant and additional writer. Perrine’s recent projects include additional writing on TV shows “The Act” (Hulu), “Counterpart” (Starz), “Channel Zero” (Syfy), “Cursed” (Netflix) and movies, such as “Lizzie” (selected for Sundance), as well as additional arrangements for movies “Mile 22”, “Submission” and “Three Christs”, and video game “What Remains of Edith Finch”. Most recently, she completed the music for short films “Before the Storm” (selected for the Manhattan Film Festival) and is co-credited as composer for the season 2 of Netflix hit series “The Umbrella Academy”. She was also one of the ten featured composers in “The Future is Female” concert series where she premiered two pieces, “Ten years” and “Life Was So Beautiful Then”.

Perrine was one of the few lucky composers selected to participate in the SESAC Scores workshop series with composers Christophe Beck (“Frozen”, “Ant-Man”) and Chris Bacon (“Bates Motel”, “Men In Black: International”) and is currently working on her first orchestral album, which is set to release later this year. This summer, she will be one of the eight featured composers of the Emerging Hollywood Composers Concert at the Endless Mountain Music Festival, where she will be premiering a new concert piece, “Odyssey of the new World”.