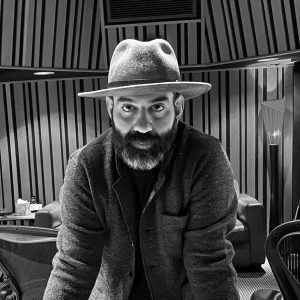 Iranian-born Nima Fakhrara is the founder of Zoo Creatives, with studios in Los Angeles and New York City. His credits include the Jonathan Milott and Cary Murnion’s BECKY,  Sony PlayStation DETROIT BECOME HUMAN, John Stalberg Jr’s CRYPTO, Toronto Film Festival Official Selection, THE GIRL IN THE PHOTOGRAPHS (the final film executive produced by Wes Craven), the Los Angeles Film Festival selection CONSUMED (directed by Daryl Wein), the Sundance Film Festival selection THE SIGNAL, GATCHAMAN (directed by Toya Sato and starring Tori Matsuzaka and Ryohei Suzuki), a live action take on the anime series BATTLE OF THE PLANETS, THE PYRAMID (directed by Gregory Levveseur, produced by Alexander Aja), and EXISTS (directed by Eduardo Sanchez). His international credits include the Japanese TV show called TANTEI NO TANTEI, and the SXSW selection I AM A HERO. His video game credits include RESIDENT EVIL: REVELATIONS 2 and the 2016 release 1979 REVOLUTION.

Nima’s first experience with music was listening to his uncle play the santour. Influenced by this, he studied that instrument and became well versed in Persian classical music. After moving to the United States, Nima continued his musical studies and attended California State University Northridge where he obtained his degree in composition studies. However, his interest in music was not limited to composition and performance. He studied ethnomusicology, anthropology, and how to construct instruments. Classically trained with both traditional western and non-western sounds, Nima often sample instruments from around the world. If he hasn’t found the right sound, he invents new instruments to create the textures and timbres in his mind.