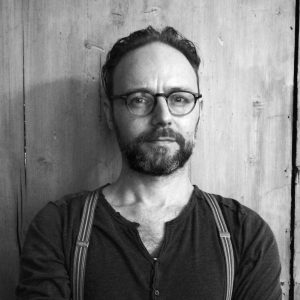 Since 2004, Pepijn Caudron aka Kreng has scored many soundtracks for dance and theater performances. His long-standing collaboration with the Belgian surrealist horror-theater company Abattoir Fermé has influenced the development of his own voice as most of these performances feature little or no dialogue, allowing the music to become an extra character that drives the narrative.

After more than a decade of composing music for the stage, Pepijn shifted his focus to creating music for film. Recent film scores include the Sundance favorite, ‘Cooties’ (2015), ‘Camino’ (2016), ‘Lowlife’ (2017) and Karen Gillan’s directorial debut ‘The Party’s Just Beginning’. In 2018 he wrote additional material and produced the OST-release of Jóhann Jóhannsson’s score for Mandy by Panos Cosmatos. Caudron also scored the virtual reality-videogame ‘Transference’ for Ubisoft, which is set for release in the fall of 2018.

Under the name Kreng, he has also released independent work. Kreng’s peculiar world of sound drew attention from the Norwegian record label Miasmah. This resulted in the critically acclaimed album ‘L’Autopsie Phénoménale de Dieu’ (2009), followed by ‘Grimoire’ (2011), the lavishly designed retrospective compilation box ‘Works For Abattoir Fermé 2007 – 2011’ and the 7″ vinyl ‘… And Then in The Morning’ on the Berlin-based label Sonic Pieces. ‘The Summoner’ (2015), his most personal record to date, was created around the Kübler-Ross model of the five stages of grief. Belgian sludgemetalband Amenra collaborated with him on one track. German musician and composer Nils Frahm did the mastering of most of his albums.