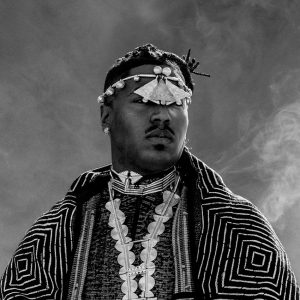 Christian Scott, also known as Christian Scott aTunde Adjuah (born March 31, 1983, in New Orleans, Louisiana) is a two-time Edison Award winning and Grammy Award nominated trumpeter, composer and producer. He is the nephew of jazz innovator and legendary sax man, Donald Harrison, Jr. His musical tutelage began under the direction of his uncle at the age of thirteen. After graduating from the New Orleans Center for Creative Arts (NOCCA) in 2001, Christian received a full tuition scholarship to Berklee College of Music where he earned a degree in professional music and film scoring thirty months later. As a newly ascended Chieftain in the Black masking culture of New Orleans, Adjuah has been deeply committed to turning identity politics, as it is used in music, on its ear.

Since 2002, Christian has released eleven critically acclaimed studio recordings, two live albums and one greatest hits collection. According to NPR, “Christian Scott ushers in new era of jazz”. He has been heralded by JazzTimes Magazine as “Jazz’s young style God.” In 2017, Christian released three albums, collectively titled The Centennial Trilogy, that debuted at number one on iTunes. The albums’ launch commemorated the 100th anniversary of the first Jazz recordings of 1917.

In addition to scoring documentaries for Hennessy Cognac and others, in 2017, Christian has scored commercials for Tag Heuer watch makers and The Gap clothing company, as well as music for ESPN’s Sports Center. Christian has also recently completed a music project, in which he served as leader, in conjunction with 1800 Tequila and Billboard Magazine called The Refined Player’s Series.

Christian is a scion of New Orleans’ first family of art and culture, the Harrisons, and the grandson of legendary Big Chief, Donald Harrison Sr., who lead four nations in the City’s masking tradition. The HBO series, Treme, borrowed the name “Guardians of the Flame” from African-American cultural group Scott began “masking” as a member of with his grandfather in 1989. Christian recently became the Chief of The Brave, in February 2017, one his grandfather’s early banners. In 2018, Tulane University’s acclaimed Amistad Research Center announced its archive of the Donald Harrison, Sr. legacy papers to highlight the Harrison/Scott/Nelson family’s contributions to the arts, activism, and African diaspora cultural expressions. The Harrison family’s story has been documented by Oscar winning director, the late Jonathan Demme, in his post-Hurricane Katrina works.

Adjuah recently received his 4th and 5th Grammy nominations for his 2020 album, Axiom.