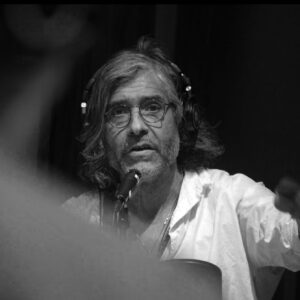 Born to famed record producer and executive Bob Thiele (the man behind “What A Wonderful World”) and jazz singer Jane Harvey, who sang with Duke Ellington and Benny Goodman, the younger Bob grew up surrounded by music. He fondly recalls watching acts like Janis Joplin & Big Brother and the Holding Company at The Fillmore East, hanging out in the studio at 12 watching B.B. King record the album Lucille, and going to San Francisco in 1967 to explore the Haight-Ashbury scene while his dad was trying to sign the Steve Miller Band.

Bob started out writing music for the likes of Ray Charles, Bonnie Raitt, and Aaron Neville. In 1995, he took a gig in A&R at EMI Records, which he describes as, “Anything but what I was hoping it would be!” As the musical landscape shifted with the turn-of-the-century boy band explosion, songwriting didn’t hold the same weight for him either.

After composing a jazz score for the HBO film Bernard & Doris, he contributed to shows as diverse as The Office, The O.C., and Boston Public. In 2008, Kurt Sutter reached out and offered Bob the position of Music Director on his new show Sons of Anarchy.

For seven historic seasons, Bob oversaw the show’s music and led and founded its “house band” The Forest Rangers. Along the way, he received a 2009 Emmy nomination in the category of “Outstanding Main Title Theme Music” for the Sons of Anarchy theme “This Life.”  In 2014, he received another nomination for “Outstanding Original Music & Lyrics” for “Day Is Gone,” which he co-authored with Noah Gundersen and Kurt Sutter. 2015 saw him receive his second nomination in the category of “Outstanding Original Music & Lyrics” for “Come Join the Murder” from the series’ final season. He also released The Forest Rangers’ critically acclaimed debut album, LAND HO!, collaborating with songwriters Dillon O’Brian and Tonio K and producer Dave Way. For the record, he enlisted friends such as Alison Mosshart of The Kills & The Dead Weather, Amos Lee, Audra Mae, Battleme, Billy Valentine, and Katey Sagal for vocal cameos and additional co-writing duties.

As a songwriter and producer, Bob has collaborated with artists as diverse as Bonnie Raitt, Ray Charles, Ed Sheeran, Aaron Neville, Cher and Jane’s Addiction to name only a few.