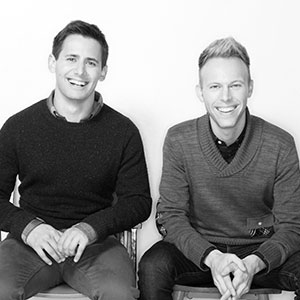 On Broadway they composed the score for the six-time Tony Award-winning Dear Evan Hansen, their highly acclaimed original musical for which they received an Obie Award, a Drama Desk Award, and the Tony Award for Best Score.

Their albums for Dear Evan Hansen, La La Land, and The Greatest Showman appeared in the top 10 of the Billboard 200, the latter of which held the #1 spot for multiple weeks in a row. The Dear Evan Hansen Original Broadway Cast Recording won the 2018 Grammy Award for Best Musical Theater Album, and The Greatest Showman Original Motion Picture Soundtrack, which rose to #1 on iTunes in over 80 countries, is certified Gold in the US, and Platinum in the UK and Australia.

Pasek & Paul had their Broadway debut in 2012 with their Tony-nominated score for the Broadway musical A Christmas Story, an adaptation of the classic holiday film, further adapted into a live telecast for FOX in 2017. In 2013, they contributed several songs to NBC’s Smash, and received great acclaim for their musical Dogfight which was awarded Off-Broadway’s highest honor, the Lucille Lortel Award for Best New Musical. Their earlier theater credits include the children’s musical James and the Giant Peach and the popular song cycle Edges. Pasek and Paul went on to receive a Daytime Emmy Award nomination for Outstanding Special Class – Short Format Daytime Program for the song “Unlimited,” featured in an Old Navy YouTube campaign. In 2017, the songwriting duo composed a song for the CW’s musical episode of The Flash, and also wrote “Get Back Up Again” for the DreamWorks animated film Trolls. Among their numerous honors, in 2007 they became the youngest winners ever of the famed Jonathan Larson Award for most promising musical theater songwriters.

Both are graduates of the University of Michigan Musical Theatre Program and currently serve on the Board of Directors for the Dramatists Guild Foundation.